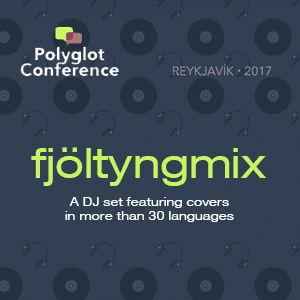 I played this multilingual DJ set in Reykjavik for the opening of the Polyglot Conference 2017 at Harpa. You can now stream the whole selection, called Fjöltyngmix (“Polyglot Mix” in Icelandic), along with a detailed presentation of the playlist featuring 30 different languages and artists.

Hot Border Special / Davíð Samúelsson  – Thriller (cover of Michael Jackson’s Thriller) – 2017
I wanted to kick off my set with a nice instrumental cover. Since Halloween was almost on us, this great and very recent Afrobeat-ish version of Thriller was an obvious choice. The Hot Border Special Bandcamp page is well worth a visit. I injected Davíð Samúelsson’s voice with a lot of echo to add a kind of welcoming yet spooky message. Davíð is the male voice artist for the Icelandic language course just released by Assimil –and a great singer too!

Turkish > Müslüm Gürses (Turkey) – Aşk Tesadüfleri Sever (cover of Björk’s Bachelorette) – 2006
Difficult to avoid Björk when launching a DJ set in Reykjavik! Müslüm Gürses, better known as Müslüm Baba (1953-2013), was a very popular singer and actor in Turkey. He gives this vibrant interpretation in Turkish of Björk’s most famous track.

Mandarin > 蕭芳芳 Xiao Fang Fang (China) – (cover of Nancy Sinatra & Lee Hazelwood’s Summer Wine)
Josephine Siao is a lady of multiple talents: a celebrated actress and chanteuse from Hong Kong, she won the Best Actress award at the 1995 Berlin Film Festival. Like many other Asian actresses, she used to sing. She also holds a master’s degree in child psychology. This track is a nice take on the Nancy Sinatra & Lee Hazelwood’s standard, which keeps the jamesbond-esque mood of the original.

Italian > Caterina Caselli (Italy) – Com’è buia la città (cover of Bill Withers’ Ain’t No Sunshine) – 1972
Actress, producer and singer Caterina Caselli (nicknamed « Casco d’oro ») is from Modena, home of the world-renowned balsamic vinegar. La Caselli delivers this classy Italian version of one the most famous hits of all time, and one of the most covered songs ever. Caterina runs the music label Sugar Music, for which she discovered, among others, Andrea Bocelli.

Hungarish > György Korda (Hungary) – Gyöngéden (cover of Nino Rota’s Parla piu piano) – 1974
I don’t know much about this Hungarian singer (that’s what happens when you read and understand only three languages). But this is one of the countless versions of Nino Rota’s classic (with lyrics by Larry Kusik), the one we hear in The Godfather starring Marlon Brando.

German > Mick Harvey (Australia)  – Ich Liebe Dich… Ich Dich Auch Nicht (cover of Brigitte Bardot/Jane Birkin/Serge Gainsbourg’s Je T’aime Moi Non Plus) – 2017
This is the sexy spot in my mix. How many babies have been conceived with this song playing in the background? And its erotic career is far from over. Australian punk pioneer – and Nick Cave’s childhood friend – Mick Harvey harbours a life-long passion for Serge Gainsbourg. He’s adapted Serge’s songs to English in four cult albums. But this cover is in German, a language he learned during his Berlin years, first with the Birthday Party then with Nick Cave and The Bad Seeds.
http://www.mickharvey.com/

Finnish > Four Cats (Finland) – Painu Pois, Jack (cover of Ray Charles’ Hit The Road Jack) – 1961
Ray Charles popularized this tune, but it was actually written by Percy Mayfield in 1960. The Four Cats “finnished” (sorry, I couldn’t resist the pun) the journey by taking it a step further.

Tagalog > Parokya Ni Edgar (Philippines) – Trip (Siopao Na special) (cover of Radiohead’s Creep) – 1996
Pino music is really a genre in itself, so it wasn’t easy to find a good cover of a classic. This is a parodical interpretation, in Tagalog, of the immortal Radiohead standard by grunge rockers and activists Parokya Ni Edgar.

Songhay > Songhoy Blues (Mali) – Kashmir (cover of Led Zeppelin’s Kashmir) – 2015
I have a deep love of Malian blues, and artists like Ali Farka Touré and his son Vieux Farka Touré. I stumbled on this incredible band three years ago during a PIAS NITE at La Maroquinerie in Paris and immediately fell in love with them. All the members of Songhoy Blues were forced to leave Timbuktu during a civil war and had to set up home in Bamako; they sing mainly in both Songhay (like in this version of Kashmir) and French. They’ve just released their great second album, with Iggy Pop guesting on one song.
http://songhoyblues.com/

Polish > The Analogs (Poland) – Strzelby z Brixton (cover of The Clash’s Gangs of Brixton) – 1996
Polish punk-rock act The Analogs have been making music since 1995. I wanted a badass moment in the set, which I think is amplified by the Polish language.

Icelandic > Björk Guðmundsdóttir & tríó Guðmundar Ingólfssonar – Í Dansi með Þér (cover of Pablo Beltrán Y Su Orchestra’s Quien será) – 1990
Björk’s vocal talents are so considerable that you could listen to her for hours, simply singing the phone directory. Young fans of her work are probably unware of the jazz side of the Icelandic superstar. Björk & tríó Guðmundar Ingólfssonar released only one album, Gling-Gló, which was a huge hit in Iceland. The original track of Quien será  reached worldwide fame with the English-language cover by Dean Martin. It can be heard it in the marvellous Wong Kar-wai movie 2046.

English > Ken Boothe (Jamaica) – Mammy Blue (cover of Ivana Spagna’s Mamy Blue) – 1976
Ivana Spagna sang the very first version of this song in Italian, before it was popularized by other international singers, including French chanteuse Nicoletta. This moving and bewitching version by the great Jamaican soulman Ken Boothe was composed by Hubert Giraud in 1970 while he was stuck in a Paris traffic-jam.
http://www.kenboothemusic.com/

Thai > Sakarin Boonpit (Thailand) – Pee Lah (cover of Elvis Presley’s Heartbreak Hotel) – 1960s
I must confess I know nothing about this artist. I found the track on a very cool yet obscure compilation.

Danish > Keld and The Donkeys (Denmark) – (cover of Burt Bacharach / Hal David’s Raindrops Keep Fallin’ On My Head) – 1960s
Keld and the Donkeys were active in Denmark mostly in the 60s and the 70s. The original song was written by cult duo Bacharach-David for the movie “Butch Cassidy and The Sundance Kid” (1969).

Norwegian > Bjelleklang (Norway) – Kyss (cover of Prince’s Kiss) – 1991
I called my Anglo-Norwegian friend, photographer and fellow fly-fisherman Barry Ord Clarke for help on this one. For me, it was love at first listen with this funny a cappella cover by Norway’s Bjelleklang. A cappella and humour are the band’s trademarks.
http://www.bjelleklang.no/

Arabic > Malik Adouane (France) – Shaft (cover of Isaac Hayes’ Shaft) – 2008
This Arabic version has earned enough fame to become a party standard. Blaxploitation goes well with the oriental and western fusion turned out by Malik Adouane, better known as the father of a genre called After Rai.

French > Pascal Parisot – Que Je Sache (cover of Nat King Cole’s Quizás, Quizás, Quizás) – 2003
This hilarious adaptation of Quizás is the work of French chanteur Pascal Parisot. For those studying French, the chorus is a good way to learn the subjunctive!

Czech > Marta Kubišová (Czechoslovakia) – (cover of Galt MacDermot’s Hare Krishna) – 1970
Maha Mantra, also known as the “Hare Krishna mantra”, was very popular in hippie culture in the late 60s, even though the ideology was far from Hinduism. The mantra became famous worldwide because of the Galt MacDermot song featured in the musical and movie Hair.
Czech singer Marta Kubišová is famous and highly respected in her country, receiving the Medal of Merit from Václav Havel in 1995.

Serbo-croatian > Bisera Velentanlić (Yugoslavia) – Sunny (cover of Bobby Hebb’s Sunny) – 1967
A bit of Yugo-nostlagia (or yougostalgie  as we say in French). This Serbian singer, famous in the 70s, recorded this fine version of Sunny, another song covered thousands of times by many artists around the world, and a favorite of mine since childhood.

Portuguese > Seu Jorge (Brazil) Life On Mars? (cover of David Bowie’s Life On Mars?) – 2004
Seu Jorge made a great work of art – and a great work of love – covering David Bowie’s repertoire during the filming of Wes Anderson’s The Life Aquatic with Steve Zissou. He played these songs live for the first time this year in a special tribute to Bowie.
http://www.seujorge.com/pt_br

Swedish > Sylvia Vrethammar – Den Snurrar runt (cover of Sonny & Cher’s The Beat Goes On) – 1970
Multilingual singer Sylvia Vrethammar lives in Germany but is a true Swede. She released her first album in 1969 and is known for her penchant for covers.

Khmer > Cambodian Space Project (Cambodia/Australia) – Blackbird (cover of The Rolling Stones’ Paint it Black) – 2017
I love pre-Khmer Rouge music from Cambodia. I listen to a lot of Cambodian bands and singers from this era in my office at Assimil (apparently I’m the only fan…). It’s very hybrid music, mixing western pop, psychedelia and traditional Khmer singing. What’s more, I feel very melancholic listening to these songs, since most of the singers were massacred by the Khmer Rouge. Cambodian Space Project was founded by the Tasmanian musician Julien Poulson. He discovered the extraordinary chanteuse Kak Channty singing karaoke in a bar in northern Cambodia. Together, the two of them perpetuate the tradition of psychedelic Cambodian pop covers, as well as great new compositions. They’ve just released a new album, Spaced-Out in Wonderland, from which this impassioned cover of the Stones’ “Paint It Black” was taken (the Friday morning before my DJ set). I changed their cover of House Of The Rising Sun in my playlist for this psych-garage track at Charles de Gaulle airport just before flying out to Iceland.
http://cambodianspaceproject.org/

As an epilogue I used  Eva Gunnarsdóttir’s voice in the same way I did for Davíð’s at the beginning of my set. Eva is the female voice artist in our Icelandic course.